We’re All in This Together 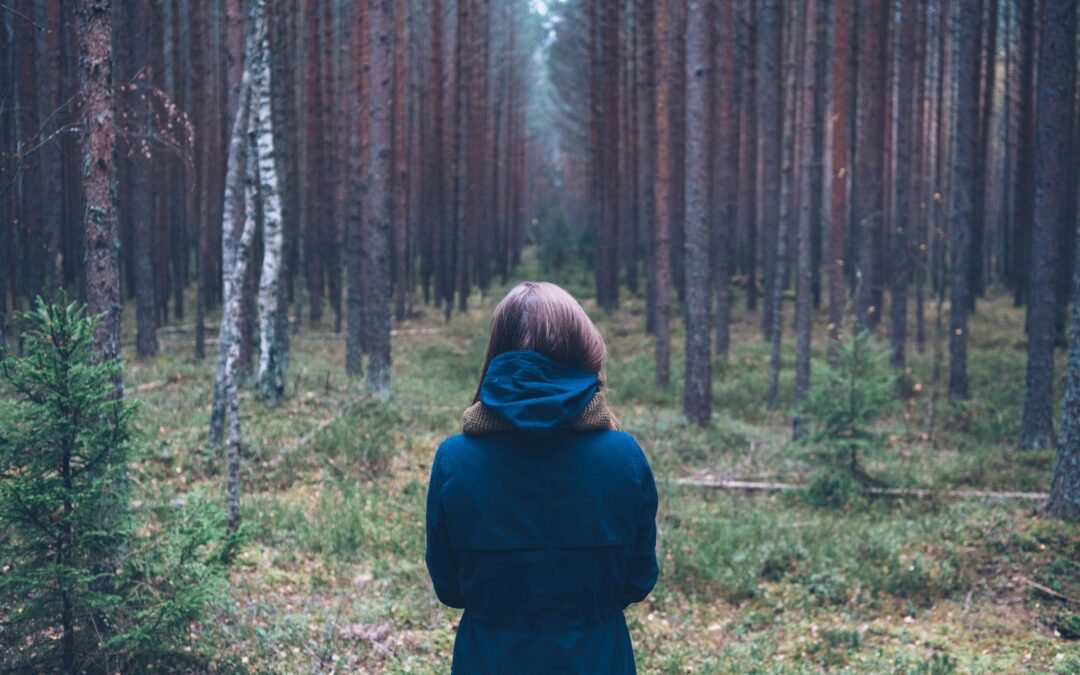 Coming from a chronic illness warrior, isolation sucks and can have a detrimental effect on your mental health. I have been here before. This isn’t my first bought with isolation, and I know it will not be my last. The difference with my isolation this time around is that everyone around me is in the same situation, when normally it is just me. Our families, our friends, our neighbors, our coworkers… we are all fighting the same battle right now, we are all in this together. There is strength in (virtual) numbers. We have tools at our fingertips to stay connected, to stay involved, but to also stay healthy. Being in isolation does not have to mean that we are alone.

In 2009, I ended up in my first round of isolation for about 6 months. My doctors knew a small piece that was going on, but they didn’t know the whole story at the time which is why the isolation went on for so long. I was still going to work, but that was the only place I was able to go. I thought that it would be a one time thing, make it through and I will be fine… I was wrong.  Sadly, my second round of isolation occured in 2011. The mysteries from the first isolation remained. Even though I was okay to function in society between the isolations, we still didn’t know the why. Leading up to my second health isolation I had one of the worst health years of my life, on top of the worst year in general. I lost my job, was left by my partner, and lost my home in the process. All that stress on top of my declining health situation left me extremely vulnerable. I spent essentially 9 months away from normal society during that isolation. Even on the days when I felt healthy, I didn’t have the energy or strength to leave my house. I ended up in a pretty dark and bleak place mentally during that isolation. I was essentially alone, fighting an unknown illness. During the entire isolation doctors kept telling me that according to the tests, I should be fine, but clearly that was not accurate. They essentially had no answers or reasons behind my illness. My friends and family didn’t know how to handle me or the situation. It was a perfect storm of vulnerability and loneliness, but somehow, I made it through. I learned a lot of things about myself and how to persevere in the process.  Since my second isolation I have not had to go into long-term isolation, but with my health it is not uncommon for me to spend days or even weeks isolated at home multiple times a year. I wanted to share some of the things that I use to cope with isolation.

What We Can Do

We are in this together.

Everyone in the world right now is fighting the same battle. We are all taking precautions and steps to ensure the safety of ourselves, our families, and our friends. Since we are all in this together, it means that everyone is experiencing the same isolation, boredom, loneliness, and fears. This is probably the most common piece of advice you will see out there, but now is the perfect time to sit down and catch up. Have those conversations with grandparents, aunts, uncles, neighbors to learn their stories. During my first isolation I spent a lot of time on the phone with my grandmother, and I heard so many stories of her time growing up on a self-sufficient farm in rural Kentucky during the Great Depression and World War II. Those are conversations that I will never forget and are some of my greatest treasures. There are so many ways to reach out and stay in contact with our loved ones these days, it is amazing. I can pick up my phone or laptop and call anyone that I want with audio and video. We can use this time to reconnect and to be there for each other.

I am in a lot of online support groups for my various medical issues. I have found that Facebook  Groups are hidden saviors for me. I originally found groups for my illnesses, but then Facebook started looking at my liked pages and interests that I had saved and started suggesting groups for my interests. Let me tell you, I have found a Facebook group for almost all of my fandoms, including the SHE Graphic Novel Book Club. I have found some incredible friends IRL from Facebook groups. Truly.  I have also found a lot of Discord channels for my fandoms. I am in a Discord channel for BTS, Sailor Moon, multiple for Pokémon Go, a few gaming groups for RPGs, a few channels for video games that I play, and even Super Heroines Etc. which  has a few for volunteers and our Womxn D&D groups. Have an established friend group? Start a Discord to stay in touch! Amino is another app that I use to connect to others in my fandoms. Amino is a social networking site that sort of is like if you had a Facebook profile for each Discord channel you are in. There are channels for fandoms, and you create a profile for each and can share content. There are abilities to go live within the app and have group live sessions to hang out and chill. I have been in a few watch parties on the app for one of my major fandoms. For my older millennial friends, I will warn you Animo really feels like the modern version of GeoCities website with a Myspace profile. I get super nostalgic when on there at times.   Through my Facebook groups, Discord and Animo, I am honestly always in a conversation of some kind. I am interacting with people and being social, even when I cannot get out of bed. The live features in all three apps allow for members to have live video sessions within the group/channel. And Discord has even upped its max live attendees from 10 to 50 for the foreseeable future. This is a great way to stay social and connected to friends online. 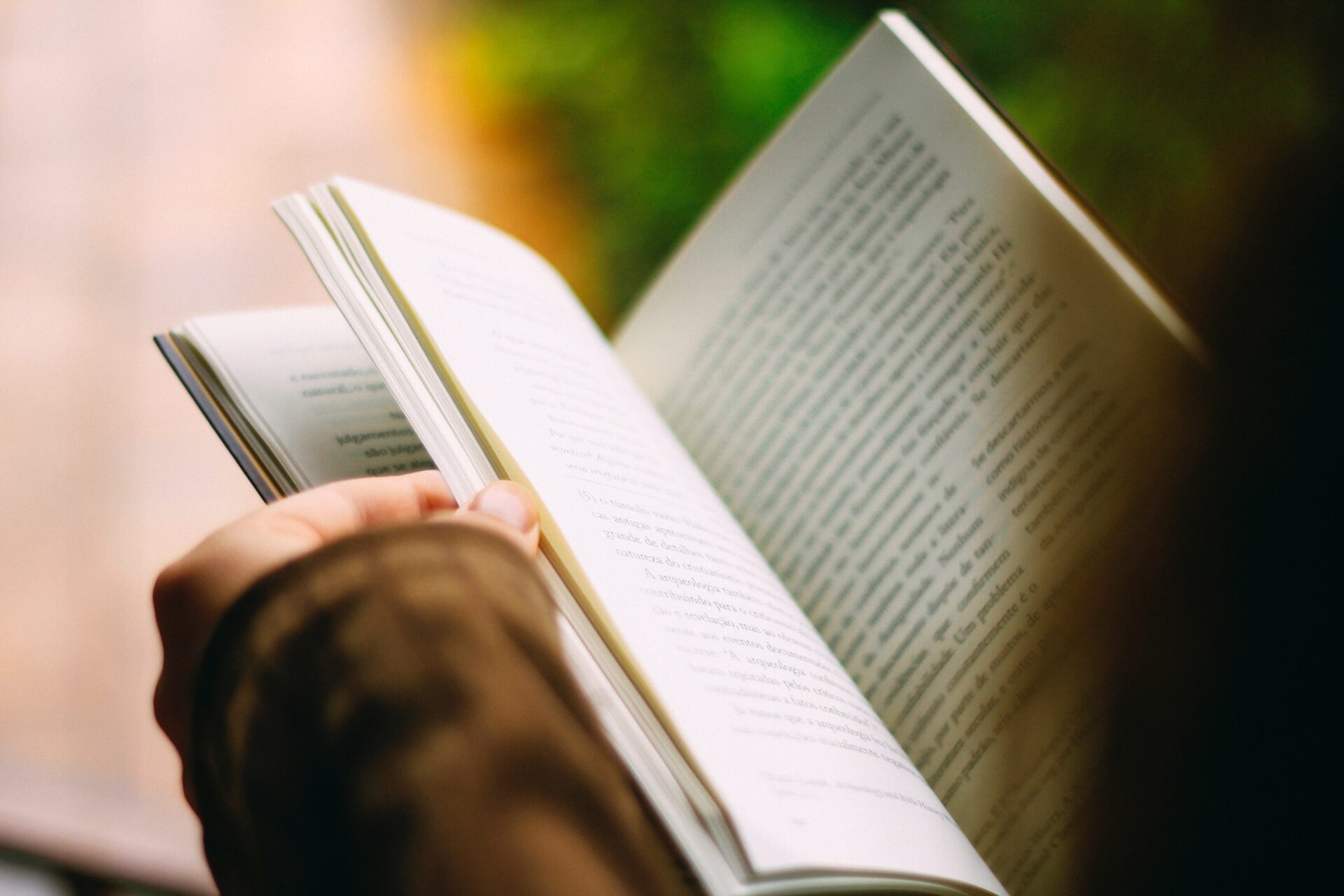 I know that this one is obvious but bear with me here. I wanted to give some suggestions that you may not know about. I know that not everyone likes digital content, I much prefer physical copies, but when I am sick and in isolation that isn’t always an option for me. So I have found some awesome places online to read content.  ComiXology is a way to buy and read comics, graphic novels, and some manga online! It is connected to Amazon, so all your purchases are stored on your Amazon account just like a Kindle ebook.
Wattpad is an online community that was created for readers and amateur writers. There is a wide range of genres, topics and formats, but it is a great (and affordable) place to read and connect with readers and writers.  Twitter – Okay hear me out… please… I won’t hide, I am an avid fanfic reader. Twitter is an amazing place to find fanfic writers and stories. Twitter thread stories are some of the coolest, interesting, creative, and most uniquely formatted stories that I have found. Seriously these creators do not just write stories, they create posts from all forms of social media to add to and enrich the stories as if you are friends with the characters online. I have also connected with so many writers and fans through Twitter. ‘Stan’ Twitter is a fun and supportive community. (If you are really in to reading fanfic, reach out to me, I have some other suggestions as well) 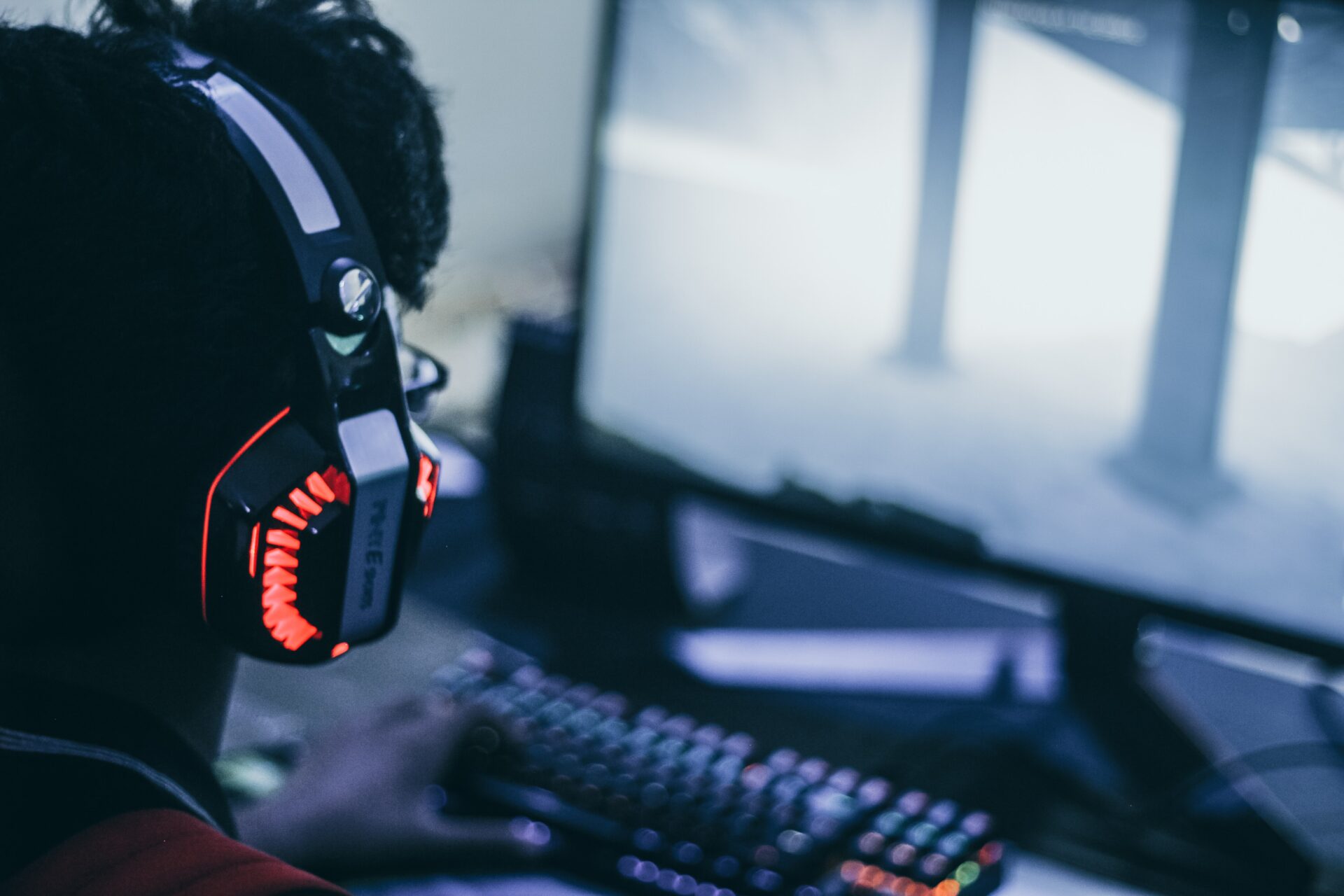 Video games are one of my main go-to hobbies. The online gaming community for consoles and PC is vast and built to handle heavy server loads. I use Discord to find and communicate with groups of players that I connect with in my games. But finding random players in game is always an option. I also play with my IRL friends whenever possible.  For my RPG groups we usually use Google Hangouts to game when I cannot be there in person. Honestly any meeting software will work. We have used Skype, Zoom, and even Discord in the past as well.
There are apps that were built specifically for online RPG groups (ex. Roll20), but my group tends to keep things pretty basic. If there is a RPG you have been wanting to play, now is a great time to get a group together digitally to try out a one shot! 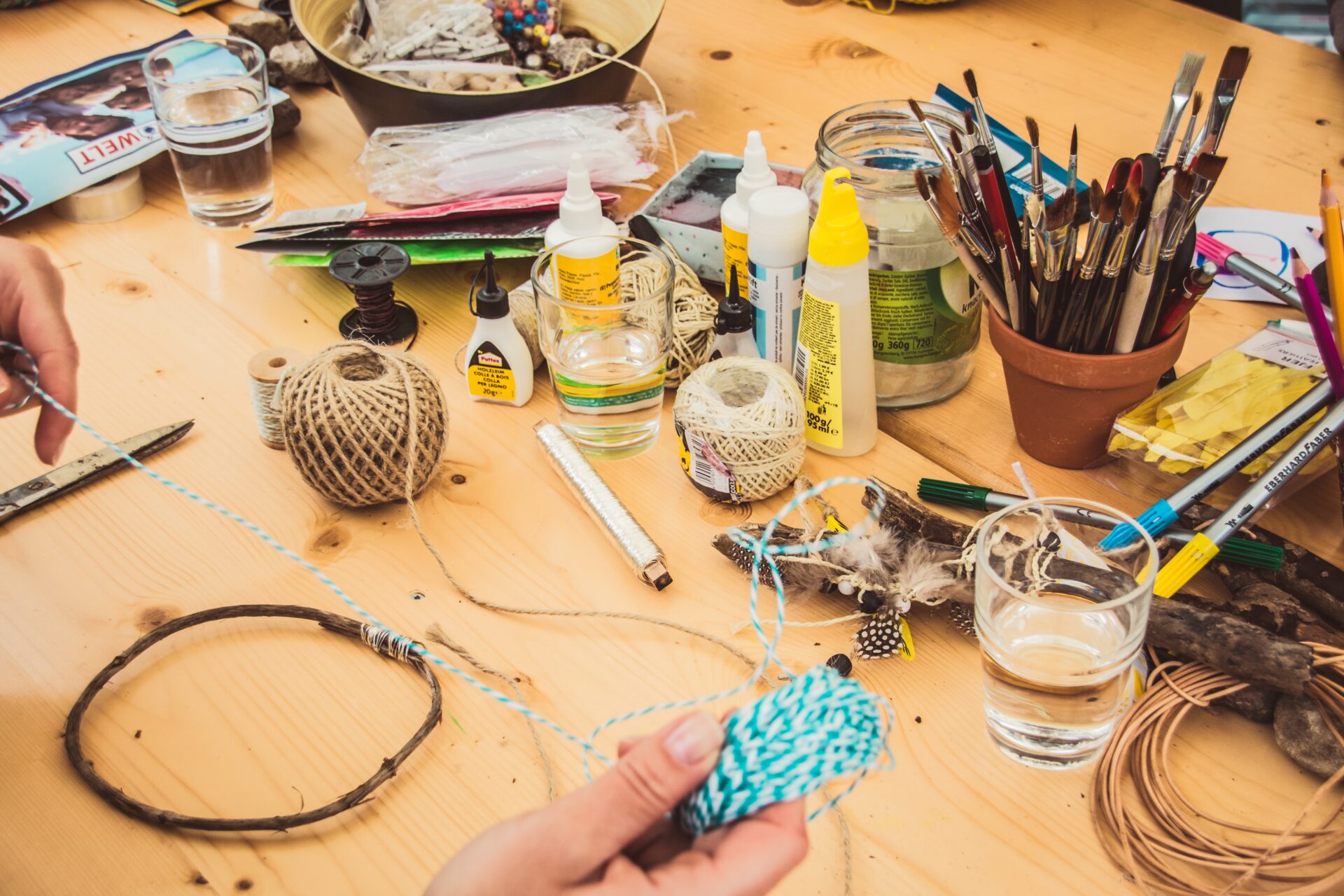 Art is one of my main outlets. I have a tendency to turn to it most when I am hurting, alone, and isolated. While in isolation a few years ago I picked up cross-stitching and embroidery. In my second isolation I taught myself hand-lettering, metal stamping, and arm/finger knitting. There are thousands of tutorials on YouTube and Instructables.com. When I am feeling well I love listening to Podcasts and music while crafting. The cool thing is that supplies for most crafting is pretty affordable and fully available on Amazon for home delivery. And when it is all said and done I have cool crafts for my home or gifts for others (after sanitizing of course).

One of the main things that I do when I am really isolated and down, is that I give back to my community. I am a board member for Super Heroines, Etc. I work behind the scenes with the organization to bring events and assistance to the community. Even when I cannot attend an event, I worked to help bring that event to life.  I am active on my support group pages to help others in my situation. I try to be available to lend an ear or an encouraging word whenever I can to whomever needs it in my groups.  I mentor a young IT professional just getting in the game. I am her support and sounding board whenever she needs me (she is also an amazing friend).  I donate when I can, and I share posts for assistance and giving back to groups and specific members of the community. Right now there are a lot of people in need and a lot of companies offering breaks and assistance. I share those posts privately to those(groups/people) that I think can benefit from one another. It doesn’t take much to help and possibly change someone’s life.  Things right now seem uncertain, but we can make it through this together. We have built an vast online system that with a little bit of creativity and ingenuity can bring us closer and build a stronger and healthy community. You don’t have to be alone in times like this, we are all in this together.