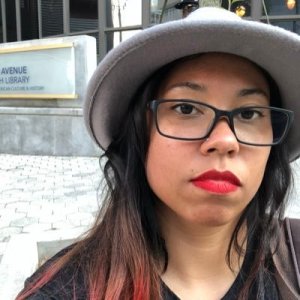 SHE Fellow Aiesha D. Little interviewed horror writer Tonia Ransom, whose NIGHTLIGHT: The Black Horror Podcast is a thing of terrifying beauty. On it, Tonia reads horror stories from Black writers across the diaspora.

Little: Tell us about yourself.
Ransom: I’m a horror writer as well as the creator and executive producer of NIGHTLIGHT. I’ve been writing horror since second grade, but only publishing for the last couple of years.

Little: How did you get into writing? Has it always been something you’ve wanted to do?
Ransom: As a kid, I saw Halloween, so when my teacher tasked us to creating our own picture books, I naturally told the story of Michael Myers. She was horrified. I thought it was just because my story was that awesome, but as I’ve gotten older, I’ve realized it was probably actually fear that I was a serial killer or being neglected/abused by my parents who would like a 7-year-old watch such a thing. I knew I wanted to put that look on the faces of more people, but I never really thought of it as a viable career—to me, writing was something people did for fun unless they were Christopher Pike or R.L. Stine.

When my dad died, I grieved through writing. It took a couple of years, but I finally realized that the novel I was writing was really about my dad and his death. It was the first time in my life I felt good about what I was writing, so I joined a critique group. I read the other participants’ work, and between their comments on my work, and seeing some of the work they were sharing, I started to realize that I could maybe do this thing and make money doing it.

Little: Who are your favorite authors and why?
Ransom: Shirley Jackson because she’s creepy AF. Octavia Butler because she was psychic. And when Rod Serling and Richard Matheson teamed up on the Twilight Zone, they made magic.

Little: Were you always interested in writing horror? How is it different from (or similar) to other genres?
Ransom: Always. I’ve never been interested in writing anything else. Briefly, I considered writing erotica or romance just for cash, but ultimately my heart wasn’t in it. I like scaring people too much. I do write some nonfiction, but it’s mostly about my own experiences, and more out of a necessity to gather my thoughts, not necessarily because I’m determined to publish it (although I would like to publish a memoir one day).

Midwest BSFA: How did you get into podcasting?
Ransom: Waaaay back when iPods first came out, iTunes had all these radio stations. A lot of those stations were Old Time Radio (OTR). Through them, I discovered The Whistler and Suspense and a bunch of other thriller/horror-type shows and thought that one day, I’d bring audio shows back. But life got in the way, and I kept putting it on the back burner. Then podcasts became a thing and I was more determined to make it a reality, but I still wanted to wait for the right time. Finally, I realized the “right time” would never happen and I should stop waiting and just do it. So here I am.

Little: Why did you feel it was important to create NIGHTLIGHT? What does your podcast offer that others don’t?
Ransom: I really wanted to read, hear, and watch more horror by Black authors—especially after Get Out. I finally got tired of waiting for someone else to do it, and true to my nature, I just decided to do it myself. As far as I know, NIGHTLIGHT is the only podcast featuring 100% Black authors, horror or otherwise. Aside from that, I do full audio production for each story, so there’s background music, sound effects, and narration that’s really acting. It’s as close to one of those OTR shows that I could get without hiring a full cast for each story, which I knew I couldn’t afford to do (yet).

Little: Who are your favorite podcasters and why?
Ransom: I *love* Science Vs. I listen religiously. The content is always interesting and I learn something every episode. I also enjoy Creepy and Pseudopod for horror—Creepy because they also do full audio production, and Pseudopod because they have some of the best horror stories out there.

Little: Why read stories?
Ransom: At the risk of sounding self-important, I truly believe stories are the best way to build empathy and eradicate xenophobia. I could talk about this topic so much, but suffice to say that, in my experience, facts don’t change minds. Facts don’t open minds. But throughout history, films like The Birth of a Nation have been undeniably harmful. And if art can be harmful, I think it can also be helpful.

Little: What elements/techniques do you bring from writing into podcasting?
Ransom: I’m really good at pacing stories—most times 🙂 In fact, I sometimes pace stories a bit too quickly toward the end and I’ve got to make a conscious effort to slow it down a bit. But I think my ability to pace stories well, and create tension has been useful in creating the sound effects for the podcast. I can take advantage of slower points in stories with jump scares or urgent, sharper ambiance music, then drop it suddenly when….nothing happens. It’s a lot of fun.

Little: Who are some of your dream “get”s for the podcast as far as stories go?
Ransom: I would love to produce Daniel José Older’s short story Anyway, Angie. It would be amazing with sound effects. Aside from that, a story by Tananarive Due and Victor LaValle are at the top of my list.

Little: What are you working on right now?
Ransom: I’m working on a couple of things right now—first is a Twilight Zone episode I wrote. I’m producing it for a NIGHTLIGHT special Halloween episode and I’m beyond excited about it. I’m also working on an audio drama that’s American Horror Story meets Superstition. I hope that one finds a home soon because I can’t afford to bankroll it alone.

Little: Anything else you want our audience to know?
Ransom: 1. Don’t be afraid to be yourself. 2. Listen to and read more Black horror. 3. Join the NIGHTLIGHT legion on Patreon to help support Black horror and get perks like extra episodes and behind-the-scenes content.

For more information about Ransom and the NIGHTLIGHT podcast, visit nightlightpod.com.

A version of this interview first appeared on the Midwest Black Speculative Fiction Alliance blog in August 2018.