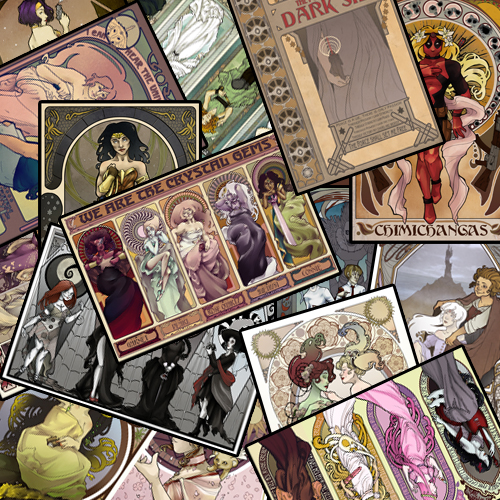 We’re gearing up for the first Super Heroines Con (Aug. 3-9) and we’ll be spotlighting our vendors here on the SHE blog. Next up is Valentine Baker, Indie Press Revolution and Atomic Pixies!

Based in Portland, Oregon, Valentine Barker is a freelance illustrator and comic artist originally from San Jose, California. He studied illustration at the California College of Arts and Crafts and spends his days drawing things that make him giggle while singing Portishead songs to his dachshunds, Maxfield and Hazel.

Indie Press Revolution (IPR) is a network of creator-publishers devoted to bringing you the latest innovations in tabletop roleplaying and story games. Launched December 1, 2004 with seven member-publishers, we’ve grown to connect more than one hundred small-press tabletop roleplaying and story game companies to retailers on five continents, conventions, and individual customers.

The trio of Terra Hanson-Necessary, Sarah Hughes and Beverly Necessary have been creating art together for over a decade. From comics to fine art, they have a unique way of collaborative creation that enhances the work of each artist. The trio met at a local anime convention in Denver, Colorado back in 2007, and after becoming fast friends, they formed the creative team now known as the Atomic Pixies and have been working as a creative team for over ten years, now. In addition to traveling and selling their prints at conventions across the country, they have worked on a multitude of projects together, including the published comics Evermore (Cellardoor), Harbour (Chubby Anthology), as well as self-publishing Anomaly, Rendezvous: To Get To You, and Isolate. It does help in their creative process that they are all roommates, so they are able to share everything between them. From new ideas to their comic book collections, they share their skills, their burdens and push one another to become better, each day.

Meet Valentine, IPR and Atomic Pixies during SHECon’s virtual happy hour from 8 to 9 p.m. on Friday, Aug. 7! To see the full con schedule and register to attend, go to https://superheroinesetc.org/events/super-heroines-con/schedule/.