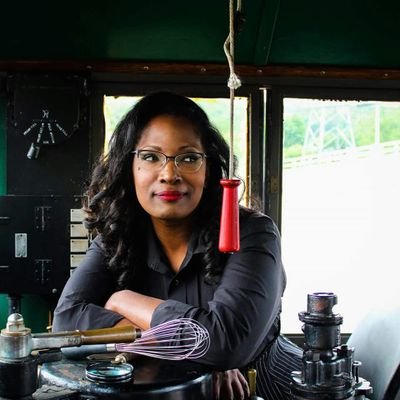 SHE Fellow Aiesha D. Little spoke to author/chocolatier Nikki Woolfolk about their approach to storytelling and future projects.

Little: What are your pronouns?
Woolfolk: They/Them though there was one person that used to follow me around like they were Marcy to my Peppermint Patty and called me “Sir.” Only they could get away with making it sound endearing.

Little: How did you get into writing?
Woolfolk: School projects that required essays scared me the least. Though I didn’t attempt to write any novels until I was out of high school at 17. Like any first draft and first novel it was awful but the story still has a place in my heart.

Little: Who are your favorite writers and why?
Woolfolk: Gail Carriger has secretly been my book crush shero due to her madcap humor in her work and her very out and proud characters, main and secondary. Zoraida Córdova’s Labyrinth Lost is a refreshing read and a friend of mine, Cat Scully, did the map art work for the book so the novel has double love from me. I love Neil Gaiman. The first work of his that I read was Anansi Boys. The story was clever and respectful of the mythos, but one thing I noticed was that he chose not to describe the main character’s race. Gaiman only did so with non-melanin characters.

Little: What got you interested in writing in your genre?
Woolfolk: I grew up on mystery TV shows and old Hollywood detective movies, and science fiction. I grew up in the IT industry and aviation, and loved listening to the senior workers in both fields talk about how things were as compared to the current environment. In my informal and unplanned interviews I discovered history in the people that history books would never tell. I love when genres mash-up. So my contemporary romance stories are comedic in tone and play on my favorite historic stage plays. My murder mysteries are in quirky locations with a nod to history of either that real area whether it’s an airship hanger reminiscent of the bygone era of Moffett Field, the French town Honfleur picked up and placed in a steampunk set Louisiana.

Little: Give us a short synopsis of your most popular book.
Woolfolk: Mise en Death, a Bittersweet Mystery, Book #1: For Alex LeBeau, everything is finally mise en place—falling into place. Given an opportunity to teach at a friend’s struggling cooking school, Alex LeBeau returns to Louisiana, determined not to ruin it by falling for the first beautiful woman who crosses her path. Naturally, as she rushes to prepare for a catered airship banquet, she literally sprawls at the feet of Josephine, whose warm eyes and baffling accent melt Alex’s heart into a puddle of ganache. But when a banquet mishap leaves the hostess dead and Alex’s son charged with murder, Alex must risk everything—including exposing her past—to save her son. And stop the real killer from striking again.

Little: How did you come up with the concept?
Woolfolk: I was around 11 years old when I thought, “How would Black people be today if the Civil War never happened? What would happen to our psyche if slave revolts were successful and America didn’t hate us?” I did not realize then but decades later, it would be the foundation of my steampunk universe. Any genre story I write, whether novella or novel, is with that very concept in mind. It has opened up the possibilities of Black folks moving forward in time as we contribute to society with our skill sets and ranges of talent. Also, I really wanted to have a mystery that begins with taking out a character in the most absurd way. I know it was a couple of decades ahead of time, but I referred to Rube Goldberg as the inspiration for the machine that kills off a character. One of my current favorite displays of that concept is OK Go’s “This Too Shall Pass” video.

Little: What were you trying to accomplish with the book?
Woolfolk: The family you find is a common theme in my stories. I do write about tragedy that has affected me and my friendships and so I write about lack of support versus the outcome of people’s lives when they do have the needed support.I think it’s an experience many other LGBTQ+ folx discover and cultivate, too. Also, I wanted to show bisexual and lesbian characters on adventures, not struggling with coming out. I needed upbeat stories about us for us so I wrote one I didn’t see in the world.

Little: What do you hope readers get out of your book?
Woolfolk: A good laugh on all the right parts.

Little: What are you currently working on?
Woolfolk: I’ve got multiple projects happening at the moment. I’m writing and finishing up multiple series in order to release them because my readers have been very patient. So right now I’m working on three steampunk murder mysteries, three humorous contemporary romances and plotting a steampunk spy series for next year.

Little: What are your writer goals for 2020?
Woolfolk: To pace myself and enjoy writing my stories instead of focusing only on the end result of finishing. I hope that I can continue to immerse readers into my worlds and make them hungry.

Little: Is there anything else you’d like our readers to know?
Woolfolk: I’m more charming digitally than in real life.