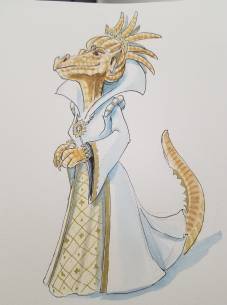 In summer 2018, 12 Cincinnati artists and writers got together to play Dungeons & Dragons, which culminated in Ral Buldhar, an art exhibition on collaborative gaming. SHE Fellow Aiesha D. Little wrote the following essay as she wrestled with oppressive narratives in roleplaying games.

This is my sixth week of playing Dungeons & Dragons with the group at Chase Public and it only took four weeks for things to come to a head.

The storyline in our current campaign revolves around the conflict between different “races” (Elves, dwarfs, etc.) and the “oppressed” giants whom they defeated in a previous war and now treat like second-class citizens. When this became clear to me a few weeks ago, I had to speak up. I sent this message to everyone in my group:

“OK, so I’ve been thinking about this: I’m not 100 percent sure where our campaign storyline is going but it seems like we’re about to do that thing where fictional oppression is used as a stand-in for a discussion about real oppression and as a person who belongs to a real marginalized group, I want us to tread lightly. Fictionalized oppression as gameplay is not what I consider a positive addition to my self-care regimen.”

Part of my initial hesitation about playing D&D was because of the horror stories I’ve heard about other women and people of color trying to play the game. From rape narratives being added to storylines because a woman is in the group to the microaggression of using fictional “racial” oppression as source of conflict for story advancement, the grumblings that I’d heard from people in my own circle and those belched up from the bowels of the internet didn’t give me much confidence in the game. And just as I suspected, one of the reasons for the hesitation ended up staring me in the face.

The dungeon master apologized, saying that she saw my point and the objective was not to make anyone uncomfortable, and others in the group chimed as well. It was squashed and we moved on. But this situation did raise a red flag that I’m sure every racially marginalized person who’s ever played D&D has had to confront. It comes down to do I object and “ruin the fun” or do I walk in my truth and make sure I’m not being made uncomfortable even if it makes other people uncomfortable?

These days, I’m hyper-aware of and hypersensitive to putting myself in situations that will make me uncomfortable. I no longer buy the idea that I should sacrifice my comfort for the “greater good” and it felt good to make my opinion known and not have to fight about it. To me, that’s the makings of a good D&D group. However, not having to deal with this situation in the first place would’ve been even better.

A version of this essay first appeared on the Midwest Black Speculative Fiction Alliance blog in July 2018.