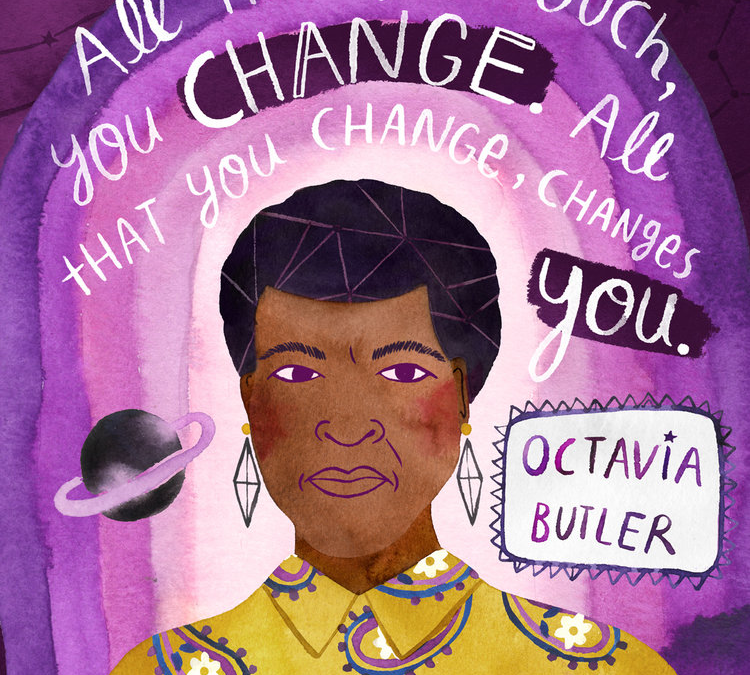 If she had lived, science fiction writer extraordinaire Octavia Butler would have celebrated her 73rd birthday this past Monday. In 2016, SHE Fellow Aiesha D. Little wrote about Butler’s impact on her life on the 10th anniversary of her death.

Octavia Butler died 10 years ago this February. In honor of this legend, I’ve been re-reading Parable of the Sower, which split my dome wide open when I first encountered it 16 years ago. I was in grad school, working several jobs, and generally being really broke, and this book came along and set my imagination on fire. I was in such a different place then – 23, underemployed, yearning for acceptance, not at all sure of what the future held for me. Like Lauren Olamina, the book’s protagonist and narrator, I was on the verge of discovering something…about myself, about the world around me.

I think it’s apropos to tackle this book again after all of these years, especially when the political and social upheaval in the world around me makes some of Butler’s near-future narrative read like tea leaves. When I’m feeling particularly gloomy, I see Sower as the fire at the end of the tunnel disguised as light in much the same way that I see Margaret Atwood’s The Handmaid’s Tale. I see Lauren’s highly exaggerated version of Hyper Empathy Syndrome as a metaphor for how Black women’s pain mirrors that of Black men, but is still rendered invisible (her own father essentially calls her illness as a figment of her imagination).

There are plenty of negative things to focus on – the violence in Parable is palpable and sustained – but there’s also the joy of creating a community, of establishing your own spiritual center, finding a way to exist anew outside of the confines of what you’ve been told is the only way to be. Lauren made her own. In real life, Octavia made her own. And so can you.

“The King is dead” was a phrase used to announce the death of a monarch. “Long live The King!” referred to the heir who would take the dead monarch’s place. For me, Octavia Butler is both the monarch and the heir. She left us with books that will keep us talking, arguing, thinking for years to come. When it comes to science fiction, representation and great writing, no one will ever take her place in my heart.

A version of this post first appeared on the Midwest Black Speculative Fiction Alliance blog in March 2016.