Being Black and Female in Steampunk 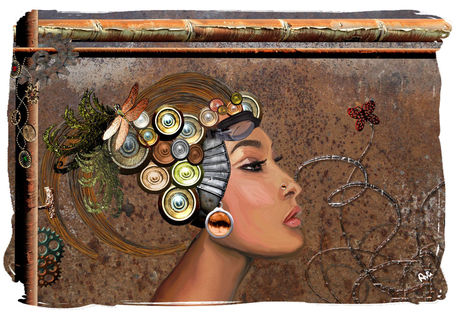 When I started getting into steampunk a couple of years ago, my first question was “There’s no slavery in this, right?” I was met with a very emphatic “NO!” It’s not like I didn’t have a right to ask. Any hobby that takes bits and pieces from a century that was horrific for at least 95% of the world’s population gets a very strong and lingering side eye. I began to feel more comfortable with steampunk when I stopped thinking about it from the standpoint of what was and started visualizing what never was but could’ve been. That, however, took some work.

My first attempt at character building was terrible: I made her the granddaughter of freed slaves who booked passage with an abolitionist to the UK to live out their days in the English countryside. Her father was the first black Rhodes scholar and her mother was an airship captain. She married a count who bought her an airship, much to her father’s dismay. Like I said, ter-ri-ble. The willingness with which I automatically created a character inside of a paradigm that limits a woman’s movements/actions – especially a black woman – disturbed me. Where was her agency? I knew I was better than that. Or so I thought.

Things changed for me when I was fortunate enough to meet Diana Pho (aka Ay-leen the Peacemaker), creator of the award-winning multicultural steampunk blog Beyond Victoriana, at the 2013 Steampunk Empire Symposium. After her presentation, I started to see more – BETTER – character possibilities. Diana has been a huge proponent of non-Western steampunk narratives and a big influence on my development within the steampunk community. I started thinking about who I wanted my character to be, what I wanted her to represent, and what I needed that representation to say about me.

I Googled “warrior women 19th century Africa” and found the Mino, an all-female military regiment in the Kingdom of Dahomey (present-day Benin, West Africa). The Mino were so fierce in battle that their European opponents called them “amazons” and they were on equal footing with their male military counterparts. This isn’t to say that the history wasn’t still problematic. But by making my new steampunk character a descendant of one of these women, I was able to use real history to act outside of the narrative the world had created for women who look like me. This character was also a chance to rethink the African continent as a whole.

Finding other African-Americans who were interested in incorporating African histories to represent their takes on steampunk has been reassuring. As a result of this meeting of the minds, I’m a member of Airship Ashanti, the flagship of the Ashanti Air Corps in service to Yaa Asantewaa. The ship’s history is based on the story of the Akan Kingdom of the Ashanti (Ghana) and its long-standing battle with the British. In 1874, England established control over many areas of Ghana, assigning them the status of “British Gold Coast.” The Ashanti had won more than a few battles, but were defeated in the final battle of the Ashanti Uprising in 1902. Although the Ashanti saw their lands annexed after the uprising, they continued to rule themselves with little interference from the British, but the British Governor, Frederick Mitchell Hodgson, demanded the Ashanti turn over the Golden Throne — the symbol of Ashanti sovereignty. The Ashanti refused and after christening Her Royal Airship (HRA) Ashanti in 1903, Yaa Asantewaa charged the crew with protecting the Golden Throne and keeping it out of British hands (just to be clear, this is the fictional portion of our program).When I first heard the story from Captain Mandisa Njeri and Sergeant-at-Arms Osei Jabulani, I was delighted by the imagination of it and the willingness to turn how we think about steampunk on its ear.

The genre suffers from a bit of Eat, Pray, Love Syndrome when it comes to incorporating people of color into narratives and back stories (especially those of Asian, Native American and Indian descent) — the need to discover/reaffirm oneself through an attempt at cultural immersion. Creating a back story filled with characters based in African history and pitting that history firmly against the British is not something you see every day. This is not the West African version version of Dances With Wolves and any Kevin Costner wannabes can take several seats. With more and more anthologies carving out literary space for narrative diversity (like Steampunk World, Steamfunk!, and THE SEA IS OURS), I have a feeling we’ll start to see more people of color trying their hands at steampunk in the foreseeable future.

A version of this post first appeared on the Midwest Black Speculative Fiction Alliance‘s blog in December 2014.