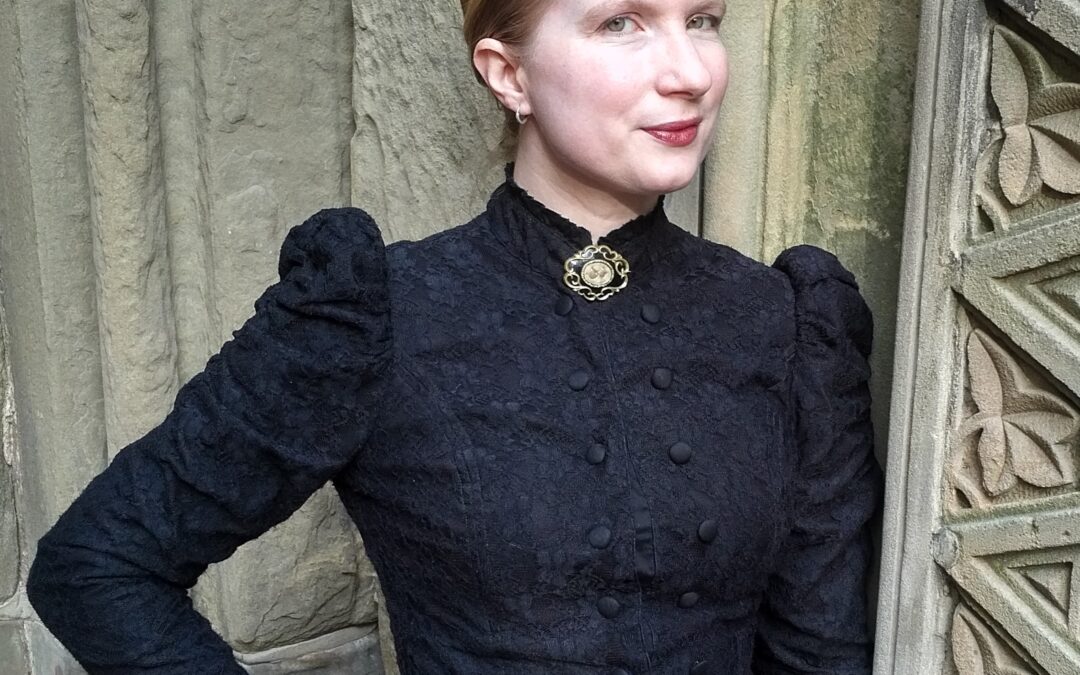 SHE Fellow Aiesha D. Little recently talked to Leanna Renee Hieber, actress, playwright and author of thirteen Gothic, Gaslamp Fantasy novels for adults and teens for Tor and Kensington Books. A four-time Prism Award winner and Daphne du Maurier Award finalist, Hieber’s short fiction has appeared in numerous anthologies and her books have been translated into many languages. Her new novel, A Summoning of Souls, comes out on July 21!

Little: Who are your favorite writers and why?
Hieber: My foremost influence remains Edgar Allan Poe, who an astute teacher pointed me towards early in grade school, knowing I loved ghost stories and spooky things. I gravitated to Poe’s ability to entwine the beautiful and the terrible. Learning about his difficult life, managing hardship and depression, I realized I, too, could translate my own inner dark-side into more constructive places — fiction. His work definitely set a certain course for my life and his ability to write in so many different genres, creating and advancing them, remains such an inspiration.

As for my favorite modern writers, I’m so blessed to be friends with so many folks I admire across so many different genres, so that list is very long. Lately, a couple of things have been getting me through. For one, Clarence Young’s In the Quiet Spaces, a meditative book of prose, humor and peace has been a go-to resource. I should also mention that Clarence, writing as Zig Zag Claybourne, broke genre wide open for me with The Brothers Jetstream: Leviathan and it remains one of the most unique novels I’ve ever read. In addition, gifted poet and storyteller Linda Addison’s short “life poems” on Twitter (please follow her: @nytebird45) have been consistently soul-replenishing in a difficult time and I look forward to them regularly. Her words manage to frame big, difficult things in prosaic art.

Little: What got you interested in writing in your genre?
Hieber: I am most known for writing Gothic, Gaslamp Fantasy (late 19th century-set novels with fantastical elements) so that early interest in Poe really shaped my writing style, but I wanted to frame my work in hope, weaving in elements of fantasy, romance and the idea of justice served that can be found in mystery novels. I also have a futuristic fantasy/space opera series, the Dark Nest novellas, that focus on psychic powers and rescuing an oppressed people. So I suppose the most common element in my writing is weaving in elements of nearly every genre. Cross-genre fiction has always appealed to me, bringing in the best of many worlds. What has been admittedly difficult, however, is sustaining a readership across the genres I write in. Some folks find me on one shelf but might not stick around to come and find me on another genre shelf, even if I’m writing the same kind of cross-genre fiction, so many of my books have been shelved in different places, it’s been hard to galvanize momentum. But I love the idea hat a book can be many different kinds of stories all in one and I keep coming back to that as a driving force.

Little: How do you go about creating strong female characters?
Hieber: I believe strength is many things and should be showcased in the widest range possible. I try to focus on the individual gifts, talents, desires and talents of each of my characters and their strength comes out as evident in their unique specialties. For Percy Parker, heroine of Strangely Beautiful, it’s her huge heart and innocent soul, even though she’s very shy, her strength is a forceful love. For Natalie Stewart, young heroine of my Magic Most Foul saga, it’s her determination, despite enormous obstacles. For Eve Whitby, heroine of Spectral City, it’s the ferocity of her calling, her ‘mission’ as an interpreter between the living and the dead, and her steadfast commitment to her all-female team of psychic mediums.

One of the most important things for me, in my life and in crafting heroines, is that my feminism be as intersectional as possible and that I keep learning how to make it more so. The only way towards a better future is for feminism to be anti-racist and stand for all women. Trans women are women. In my work, considering all my stories are about building inclusive teams where different specialties, backgrounds, interests, talents, culture, heritage, language and identity; intersectionality is the root of any true, lasting and just strength.

Little: Give us a short synopsis of your most popular book.
Hieber: That honor is shared equally between three of my books, my debut novel, Strangely Beautiful (originally published as The Strangely Beautiful Tale of Miss Percy Parker but reissued by Tor as Strangely Beautiful so for folks looking for a copy, please support the revised Author’s Preferred edition!), Darker Still and The Spectral City. Each of these three books is book one in their respective series and all have a similar core message and trajectory: Found families of quirky characters and their favorite friendly ghosts come together, in the late 19th century to save the day. In each of my series there is a large dark magic, conspiracy, and/or villainy at work that is trying to undermine the positive progress of humanity and in each case my characters use their own distinct gifts and callings to avert disaster and set a brighter, fairer course.

Little: How did you come up with your book concepts?
Hieber: For Strangely Beautiful it was the idea of how a shy, spooky and misunderstood girl could save the world with love, for Darker Still and the Magic Most Foul saga it was how could I honor classic 19th century literature and reinvent it for a modern audience with a strong group of young people at the center, for the Spectral City series, it was the question of how could I infuse a historical paranormal procedural with a new take on a classic ghost story to feature hauntings that are also helping. I’m very interested in playing with the traditional tropes of a Gothic novel and reframing terror with hope and inspiration.

Little: What were you trying to accomplish with your books?
Hieber: In each case, I write about found family finding one another and about the healing power of spirit, love, inclusion and support. I want to entertain, but also to highlight aspects of historical figures, settings, areas and influences that were templates for modern justice, rights, conversations and revelations. I do write with fantastical elements but there’s a lifetime of historical research and academic background that goes into every series and I’d like to think readers may be enriched as well as inspired after spending time in my worlds.

Little: What do you hope readers get out of your books?
Hieber: I would like folks to think of my characters as quirky friends, part of their own found families and fellow travelers. I hope readers feel inspired to follow their own passions, callings, interests and talents just as my characters are drawn to theirs. I’d like readers to feel encouraged, and to encourage others in turn.

Little: What are your writer goals for 2020?
Hieber: Next up is releasing a new novel! A Summoning of Souls will be out July 21 from Kensington Books in digital and trade paperback, wherever books are sold! Beyond that, honestly, my goal is to stay contracted for more writing. It’s a hard time right now for everyone and I’m trying to keep a lot of things in the works. I’ve several stories coming up in anthologies but I’ve got to secure my next novel, so my goal is just to keep writing and stay visible.

Little: Is there anything else you’d like our readers to know?
Hieber: Please come find me on social media and say hello! I’m most often on Twitter at @leannarenee, I’m on Facebook at www.facebook.com/lrhieber and Instagram @leannareneehieber. I have writers’ resources as well as free reads on my website: http://leannareneehieber.com, where you can sign up for my new-release-only mailing list. On Etsy, I craft gothic, neo-Victorian and steampunk-inspired jewelry as well as vintage restoration.