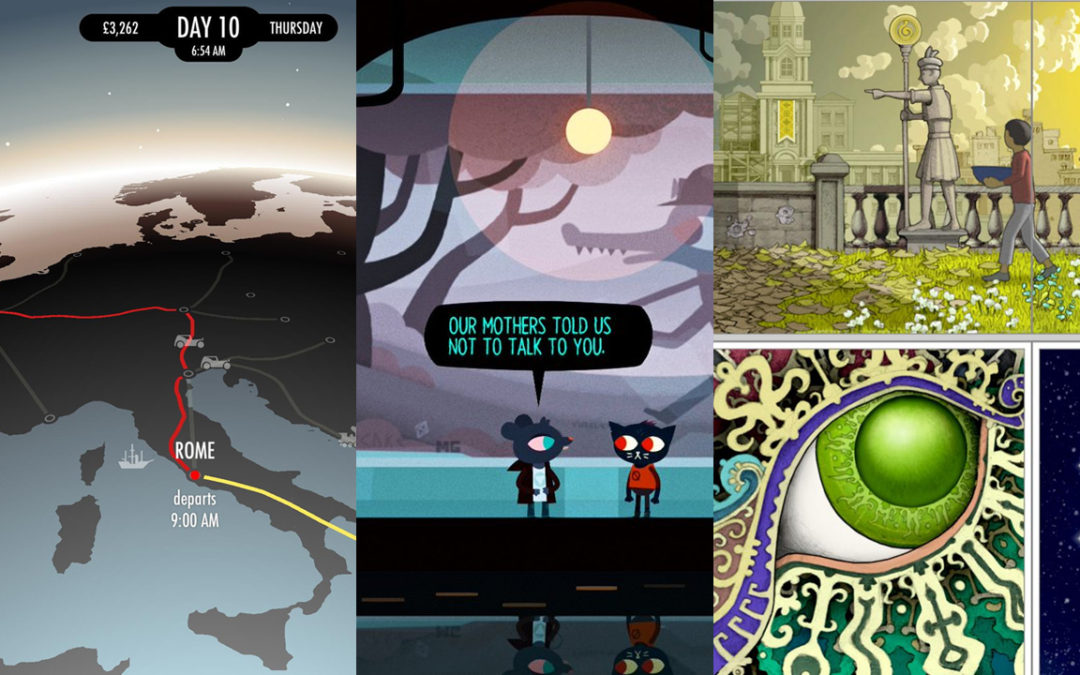 I grew up playing video games with my friends, but around middle school I stopped feeling like there were as many games “for me” and I found other things to do with my time. But then in the end of college I started hearing about indie games for the first time…

What strictly defines “indie” game is somewhat debated in the games industry, but in general they are created without the financial backing of a large game company. Because of this financial independence, indie games can afford to take more creative risks. There have always been indie games, but in 2007 the rise of indie-accessible platforms like Steam, partnered with social media, created an ecosystem where creators could actually potentially make a living off of small, weird, artistic games – and today they are a thriving sub-category of video games.

Maybe you, like me, grew out of games when you stopped finding as many that felt like they were right for you. Or maybe you never even got into them in the first place? Well indie games might just be for you! Unfortunately if you’re not constantly plugged in to the scene, it’s very easy to miss games that might actually be perfect for you, which is where this article series comes in!

This series of articles is intended as a curation of a small number of indie games across various platforms. I’m only one person and we all have our own tastes and interests, but I’ve tried to pick games that I think will appeal to the Super Heroines, etc crowd.

Recommended if you like: Desert Photography, Archaeology, Emotional Orchestra Music

In general, Journey is the one indie game that most non-indie-game people have heard of. You play as a robed character wandering through a desert collecting scraps of cloth. All of the story-telling is visual and it’s primarily an atmospheric, non-challenging, exploratory experience with beautiful and emotional music and cinematography. Journey introduced the innovative idea of playing with other people online using only visual communication in game (which honestly scared me before I played it since I thought I’d “do it wrong,” which is impossible). The game was highly lauded in 2012 and is definitely worth checking out!

80 Days basically a choose-your-own adventure story where you travel around the world. You make choices about which route to take, what items to buy and sell to fund your journey, and various story-based decisions. It sounded very dry to me before I played it, but it has so much character and intrigue! You will find yourself playing it over and over to travel different routes and experience different adventures. Gameplay happens through text and menus and doesn’t require a high degree of dexterity.

Night in the Woods

Night in the Woods is a 2D side-scrolling game (think Mario – but you can’t really mess up and die) about an apathetic (cat) girl named Mae Borowski, who has come home from college in the middle of the semester without telling anyone why. She reconnects with her small town friends and discovers a series of mysterious disappearances which they decide to investigate. If you’ve ever felt young, directionless and disaffected you will feel this game hard.

Recommended if you like: Picture Books, Puzzle Boxes, Image Searches

Gorogoa is basically a mysterious series of visual puzzles that sort of vaguely allude to a story. Gameplay happens through manipulating window-like panels which link images together in various ways to cause things to happen. Lol maybe this sounds vague but it’s very visual so it’s hard to write about! Gameplay is pretty self-directed so if you get frustrated without someone holding your hand you might not like this – as my mom said while watching me play, “how do you know what to do? Why would anyone want to play this??” – but if you are comfortable with ambiguity, Gorogoa is beautiful and worthwhile.

Recommended if you like: Early 2000s Nostalgia, College Romance

Emily is Away is a short interactive fiction played through an AOL Instant Messenger window. You chat with emerly35, your high school crush, and try to learn about her and make a good impression! It’s short and free, and filled me with nostalgia.

That’s all for now! I have many more recommendations to come!!

Cat Musgrove is a 3D Artist and Animator. She currently works as a medical animator at the Cincinnati Children’s Hospital and makes indie games on the side.
Twitter