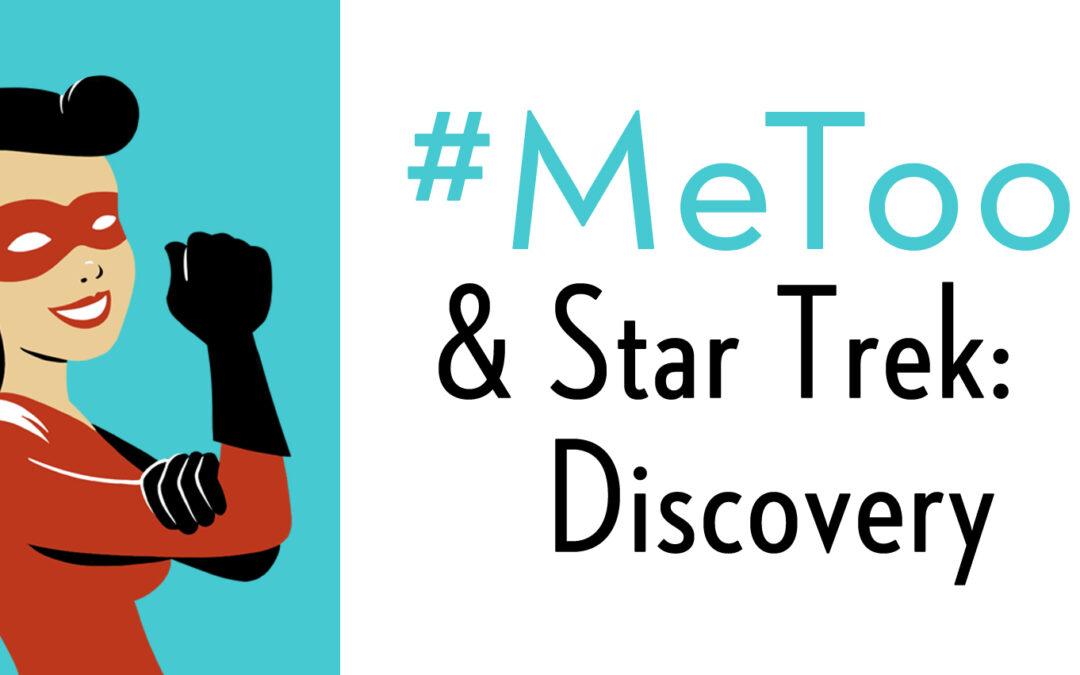 Friday, March 9, 2018, marks the release of Season Two of Netflix’s landmark show, Jessica Jones. The central storylines of Season One focus on the titular character Jones, brilliantly portrayed by Krysten Ritter, as she dealt with the fallout, recovery, and the reemergence of her captor, Kilgrave, in a bone-chilling portrayal by David Tennant. As we count down the days to the Season Two release, Super Heroines, Etc. is featuring a series on the #MeToo movement and pop-culture characters we love.

Our goal is to spark discussions by offering a unique look at stories and characters people might see themselves in and to provide resources and guides for talking about and healing from assault and harassment in its many forms. For this post, we examine themes of consent in Star Trek: Discovery.

Star Trek: Discovery boasts a diverse cast, providing viewers their first female African American lead in Sonequa Martin-Green as Michael Burnham. Burnham begins the series as the first officer of the USS Shenzhou, becomes a mutineer whose actions cause both a war with the Klingons and the death of her mentor, and then ends up as a valued crew member of the USS Discovery. It also boasts storylines that highlight PTSD and issues of consent involving Burnham and Lt. Ash Tyler (Shazad Latif), a Starfleet officer who has been captured and supposedly tortured by the Klingons.

When the viewer first meets Tyler on the Klingon prison ship the they are lead to believe that he has had some kind of non-consensual sexual relationship with his torturer, L’Rell (Mary Chieffo). As the season progresses it is eventually revealed that after he was captured, Ash Tyler’s DNA was harvested to transform the Klingon Voq, overlaying Tyler’s consciousness over Voq’s. From the moment Ash Tyler steps onto the Discovery after being rescued he is a Klingon sleeper agent, his true identity unknown to everyone on board, including himself. 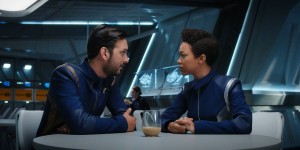 Which brings up the issue of consent. Burnham and Tyler begin a flirtation that builds over the course of the season. In Episode 7 (“Magic to Make the Sanest Man Go Mad”) the two kiss for the first time – though it is during a time loop that the Discovery is caught up in. Lt. Commander Paul Stamets (Discovery’s chief engineer and discover of the Mycelial network, which allows the ship to jump through space – and eventually universes)  is the only crew member who can remember from loop to loop what has happened. Stamets uses his knowledge to manipulate Burnham and Tyler together for the benefit of saving the ship and crew. And while neither of them remember their first kiss, Burnham and Tyler continue along their path, leading to them eventually sleeping together in Episode 10 (“Despite Yourself”) as they infiltrate the Mirror Universe.

Throughout their budding relationship, Burnham is unaware of Tyler’s true, Klingon nature. However, by the end of Episode 10 when the two are intimate Tyler/Voq has gained some self-awareness and is actively keeping it from Burnham. Picking up at the beginning of Episode 11 (“The Wolf Inside”), Burnham and Tyler are sharing an affectionate moment and he tells her that she is his tether to this world–his manipulation of her continues. Tyler/Voq’s true nature is fully triggered when they meet the Mirror Universe Voq and he later admits who he truly is to Burnham.

The most obvious issue of consent, or lack thereof, is between Burnham and Tyler/Voq. Burnham believes that she is entering into a relationship ship with the human Lt. Ash Tyler; as someone whose parents were killed by Klingons it can be reasonably assumed that Burnham would not willingly become intimate with one. Can someone offer consent if they do not have all of the information? Can consent be given under false pretenses? Absolutely not. Star Trek: Discovery does not go so far as to claim that the intimate acts between Burnham and Tyler/Voq amounted to sexual assault, but without true consent that is exactly what they were and it is a little reckless to not do so. It cannot be highlighted enough that only honesty can lead to true consent and anything less is unacceptable.

It should also be pointed out that there is another victim here – Ash Tyler, as he surely did not consent to being used and manipulated for the gain of the Klingons. The question is how much of a victim the show’s writers are allowing him to be. Eventually the consciousness of Voq is stripped away from Tyler, but he is still a genetically modified Klingon with the overlay of a human mind. Tyler was part of the equation, if not all of it. He doesn’t get a free pass just because he was also a victim. As he became aware of what was happening he made a choice to continue his relationship with Burnham. Perhaps only the real Tyler who was left behind on the Klingon prison ship (as fansites suppose) is the other true victim along with Burnham.

If you or someone you know has experienced sexual assault or rape, it is important to know you are not alone. The #MeToo movement has shown us just how widespread sexual harassment and assault is and how many people have kept it a secret for so long. Trust your instincts, if it feels like assault it is assault. Find a trusted friend, family member and don’t be afraid of your own voice. There are many resources available to help you manage the healing, both physically and spiritually, including:

Latest posts by jdapper (see all)