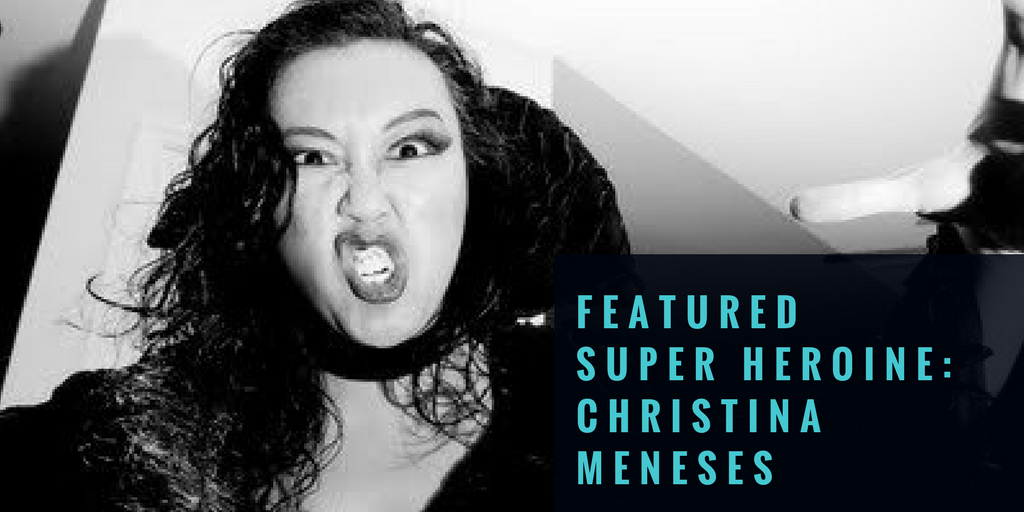 Each month we choose a Super Heroines, Etc. member to feature on our blog. This month we chose Christina Meneses, a SHE member from the beginning (the first event!), long-time event host, and all-around super heroine.

Tell us a little bit about yourself and how you came to be a Super Heroine.

I’m a social worker in St. Louis, I moved here 20 years ago from the East Coast. I joined Super Heroines a few years into moving here when I realized that while I had many amazing friends, none of them self-identified as nerds the way I did. I also have a lot of interest in women’s empowerment and loved that this group connected both. I found the group on meet-up and have been an active member ever since.

You have been a Super Heroine since the beginning(!), have attended quite a few events, and hosted so many of your own. Which one has been your favorite and why? 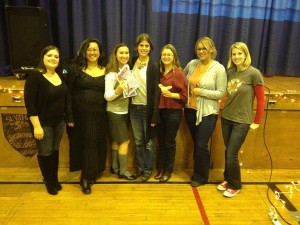 One of the very first events I participated in was a Harry Potter trivia night. Our table came in costumes, with Harry Potter-themed food. We also got every single point we could have gotten. I mostly watched in amazement as my fellow teammates would listen to the question, then nod knowingly at our scribe, who would write down the correct answer.

I’m also going to put in a plug for our monthly learn-a-game nights. I love board games, but before we started LAGN, I was a little put off by attending board game meet ups where everyone seemed to have much more experience than me. I think what makes LAGN so successful is that it’s fun for people of all experience levels, and those who do have more experience are very generous in teaching and sharing tips with newer players.

What are your TOP five nerdy interests? 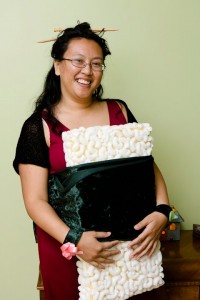 The Nerdfighteria online community; Buffy; Star Wars; geek-themed crafting (I’m quite proud of a decoupage Buffy tray table I made), board games, and coming up with costumes for obscure characters and inanimate objects (sushi, a Snitch;Trash Compactor Leia).

This month’s theme is SHE Can Do It which focuses on empowerment and skill-building. In our society, girls are often told things like “you can’t do [fill in the blank] because you’re a girl.” Have you ever personally experienced comments like this and how did you react?

I remember one afternoon at home when my grandmother told me to vacuum the living room. I looked outside to see all three of my brothers playing football, and asked, “Why do I have to do it and they don’t?” “Because you’re the girl.”
As a child of the ’70s, I grew up in a time of Free to Be and Wonder Woman/Bionic Woman/Charlie’s Angels, while also seeing clear gender lines in everything from toys to jobs to clothes to household roles. Rather than being overtly told I couldn’t do things, I was instead shown what I had to do as a woman, and learned what I wasn’t supposed to do by comparison. I’ve spent a lot of my life trying to figure out what I actually am and what I actually like to do, as opposed to the roles I’ve been given.

As we become adults, we hear less overt comments like the one above, but folks still make similar comments. Have you dealt with microaggressions like this in your career?

I am very fortunate to be working alongside people who are fighting for racial and sexual equality and empowerment, so I never hear sex-based microaggressions from my colleagues. Typically when I do hear these types of comments, they are in situations where I am leading a training, which puts me in a different position. It has been quite empowering to invite people to share those microaggressions and to be able to practice responding to them over and over and over again until they no longer carry the same weight.

What are some ways you challenge societal norms that have tried to dictate what you (or folks you know) can and cannot do?

Working in the field of ending violence against women, I have spent my career pushing for a world in which women have space to move freely without fear of harassment, which includes physical spaces, workplaces, schools, and online. I believe that women collectively have had to spend too much time, money, and brainpower mitigating an unsafe world, and want to see a world where we can use that time, money, and brainpower towards our own goals. I try to challenge the idea that women are required to make their lives smaller in order to “prevent” men’s violence.

Personally, I am working on taking up the space I deserve in movie theaters and airplanes, and setting boundaries. I also try to notice and congratulate other people (particularly women) when they say no. When someone tells me they can’t volunteer for something, or they can’t do something in a certain time frame, I’ll say, “Good job setting that boundary!”

Your work and volunteer work is centered around social justice. It seems like many people want to become more active in taking a stand against injustice. What would you say to someone who wants to get involved to let them know that “they can do it!”?

In my circles, there has recently been a lot of renewed energy around working for social justice, so the first thing I want to say is, great! You’re in good company! It can be overwhelming when you begin to consider all of the areas that need work, so decide a few things you’re passionate about, find some people or organizations who have been doing that work for a while, and read/listen to them to figure out where your talents can be used. The reality is, there have been major strides in many areas of social justice, which only happened because many people contributed in a lot of different ways. Movements toward justice depend on people like you who care.

Carolyn is the Founder & Executive Director of Super Heroines, Etc. She is a recent transplant to Cincinnati and lives with her husband and her dog. She regularly nerds out about Parks & Rec, Firefly, and Pride & Prejudice.