In Defense of Fanfiction Readers & Writers 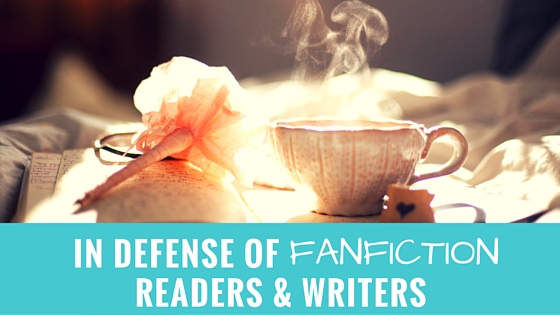 My love of fandoms has been as constant in my life as my love of baked goods. I have gorged myself on pop-culture since my days of jelly-shoes and jump-ropes, back when She-Ra, Jem and the Holograms, and Fraggle Rock were my jam. The list of shows, movies, books, music, and comic worlds I’ve been a little too excited about could go on, but this isn’t a Buzzfeed article and some would be rather embarrassing. When I love, I love hard.

Growing up I had collections of notebooks that were like an analog Tumblr of crude stories and drawings. So it’s not surprising that when I tentatively poked at my fandoms’s online communities I eventually headed their whispers, “come to the internets, we have fanfiction.” Fanfiction is a decided guilty pleasure, otherwise the community wouldn’t be so clandestine, but not long after I went to the fanfiction-side of the internet it struck me – there are merits to fanfiction that tend to be overlooked. I began to innumerate those merits to anyone who tried to strike up a conversation about writing or books with me, or anyone who just generally said hello. What are these merits I speak of? I’m glad you (didn’t really) ask, but since you’re still reading I’m going to play the odds that you’re interested in at least finding out enough to take me to task on them.

For Women, By Women

Before the E.L. James fanfiction-that-shall-not-be-named became a phenomenon, fics were relegated to a quiet and obscure corner of the internet. In a turn of events that has left both fans and creators with mixed emotions, James pulled Baby out of the corner, and the privacy of the e-reader lifted the series high and started turning it an inspired circle a’la Patrick Swayze.

With the privacy afforded the e-reader, women with entirely respectable taste in books started to dip their toes in the romance waters even before the world knew Grey, and continues to become more mainstream (source). And a growing number of fanficitons are being madeover and  published by romance and new adult imprints that are being devoured by readers. The “Beautiful Bastard” series by Christina Lauren being one recent example of a promoted to print fanfic for women who love vampires that sparkle.

It is a myth that fanfiction is solely the domain of repressed moms and hormonal teenagers, and a misogynistic one at that. However, much like its close relative – romance, it is a writing community dominated by women writers and readers.

Stop right there, though. Before we go too far entangling romance and fanfiction and all the lovely connotations they evoke, I must point out not all fanfic, or romance for that matter, is marked by heaving breasts and pearl-clutchingly descriptive encounters. I found a couple nifty pie charts, and one said only 34% of fanfiction published on the multi-fandom archive, Archive Of Our Own (AO3), is labeled as mature or explicit (source). And who doesn’t love a good pie – numerical or pastry based? AO3 is just one example of the many fanfiction archives, but it is a pretty meaty cross-section because it publishes work from just about any fandom you could imagine, and some that you could not.

Admittedly, the nice majority of fanfiction deals in relationships between major characters; some canon and some not, some romantic and some not. However, you’d be hard pressed to find a story that doesn’t have an element dealing in relationships. Even Thoreau’s “Walden” has the chapter, “Visitors.”

Much the same way romance has been wildly popular with women readers because of the type of escape it provides, women fanfiction writers are providing readers an escape from all the day-to-day junk. The major difference only being fanfiction is an escape into a world with characters that already mean something to the readers. Moreover, a number of fics give us the chance to run away for a while with female characters we love who are empowered in ways they aren’t, and never would be, in canon. I have seen female characters written in a way that completely flipped the script on their more passive and feminine roles in canon, and it is a lovely thing.

I am an unrepentant, shippy-shipper from Shipania. I shipped Zach Morris with Kelly Kapowski, Fox Mulder and Dana Scully, and Luke and Leia until “Return of the Jedi.” Watch out or I might ship you. The thing is I was supposed to ship those and the legions of other characters I shipped; shipping is built in to my brain and yours, too. There is a fancy psychological theory called the Zeigernik Effect that explains why unresolved chemistry and tension between two characters digs in and doesn’t let go of us. Writers know that pumping all that unrequited love in to our living rooms each week is going to stick with us and keep us tuning in. Basically, don’t ever apologize for being a shipper because, much like being a David Bowie fan, everyone is one but some people just don’t know it yet. (Trademark on that phrase pending.)

We view the world through our own fantastic, dramatically different lenses. While that sometimes means we bang on the computer fighting with that guy who sat next to us in freshman chemistry, it also means different ships sail for different people. One of my favorite aspects of fanfiction is that, unlike in mainstream storytelling, fanfic writers and fandoms ship regardless of race, gender, and orientation. And there is a nice chunk of writers in fanfition who are handling it very well.

For example, I have read many a book review that points out LGBT relationships are often one dimensional and simply plot serving, or that characters are written much like the dreaded Manic Pixie Dream Girl (MPDG). On AO3 more than half of the stories published deal with non-binary relationships, and while admittedly quality and content is all over the place, I have read some amazing examples of well written, inclusive fics that do not fetishize relationships or flatten their characters. Perhaps it is by benefit of the characters being well developed before the writer gets to them, but regardless, fanfiction offers more readers the chance to engage with well-rounded characters and relationships they identify with.

Fan created works are a testament to the power of the original works they are related to, proof that the characters are so well written and portrayed they are hard to let go. Fic writers are dealing with characters and worlds held dear by their readers. Fanfiction readers may speak anonymously or under a pseudonym, but they are a very vocal community that holds the writers to high standards, and there is a lot to live up to when you’re dealing with a beloved fandom. Good fanfiction isn’t so different from something written by a good ghostwriter. Just like what we saw with the ghostwriter who continued on with the “Girl With the Dragon Tattoo” Millennium Series, there is intense pressure and scrutiny from a fandom to get it right.

In most cases it is the well written, imaginative fics that rise to the top of the archives and widely shared online in the fandoms. It isn’t hard to find meaty, well done fics; fics you wish were a published part of canon because of their stunning arcs and impeccably drawn plots.

Professional mom, nurse, writer, or horse trainers, fic writers come from many different backgrounds, and therefore the skill level and quality can vary wildly. However, it is a not well kept secret that published authors have penned fanfiction (source), some openly like “Vampire Diaries” author L.J. Smith (source) and others anonymously. Let’s just stop for a moment, and reiterate: Neil Gaiman writes fanfiction. Sometimes, though, it is the nurse with the amazingly accurate portrayal of how the body would react to certain chemicals or injuries that has spun an intense story that keeps you reading until your eyes are bloodshot and dry.

In the book world it is fashionable to say young adult and fan written fiction is ruining the average person’s ability to read literary fiction. This is usually said by the same people who call genre fiction trash, but I say they need to be challenged to back up that claim after having read fan or genre fiction. While we’re at it, we should probably tell them how mom always said it wasn’t nice to say mean things, especially when you don’t know what you’re talking about. Then tell them to take a stab at reading Harry Potter. Studies have shown that YA, genre fiction masterpiece makes you a better person (source). And feel free to drop the mic.

About the author: Melody Meiners is a St. Louis-based freelance writer, editor, and ghostwriter for hire. When she isn’t writing or reading words, she spends her time devouring all of the pop-culture and theater. You can find her on Twitter (@cosmosgirl) when she really should be writing, and you can read her pithy jokes about her children on her blog (MrsSmartyPants.com).

Melody Meiners is a freelance writer, developmental editor, and ghostwriter for hire located in St Louis, MO. When she isn’t writing or reading words, she spends her time devouring all of the pop-culture or teaching fiction writing and literature classes for STLCC @ Meramec’s CE program. You can find her on Twitter (@cosmosgirl) when she really should be writing, and you can read her pithy jokes about her children on her blog (MrsSmartyPants.com).